We’re lucky, pleased, and grateful to be living the kind of life where we can pop over to Bulgaria for a long weekend.

Since M&D are writing up their cavorts around Germany, we thought we’d add in a few words and photos from our parallel adventures in Eastern Europe.

Every time we take Ryanair, we swear “never again,” and every time we are incorrect. This time, we’re accompanied by the world’s most obnoxious revelers. Landing in Sofia brings a sigh of relief.

We hop in a taxi directly to our Airbnb near the center of Bulgaria’s capital. It’s around 10PM and we’re hungry, so Melly does a quick google for nearby restaurant possibilities A, B, C, D, and a backup plan E (just in case).

We wind up at Manastirska Magernitsa, which is brimming with locals + live oom-pah Balkan music. Score!

The menus are practically novels, so we’re thankful for a cheat-sheet short version with photos made for guiris like us. We ask for a tomato salad, a baked cheese thing, and moussaka.

Bulgarian dishes are designed to be shared, and each arrives as it is ready. They’re all MASSIVE, and incredibly fresh. 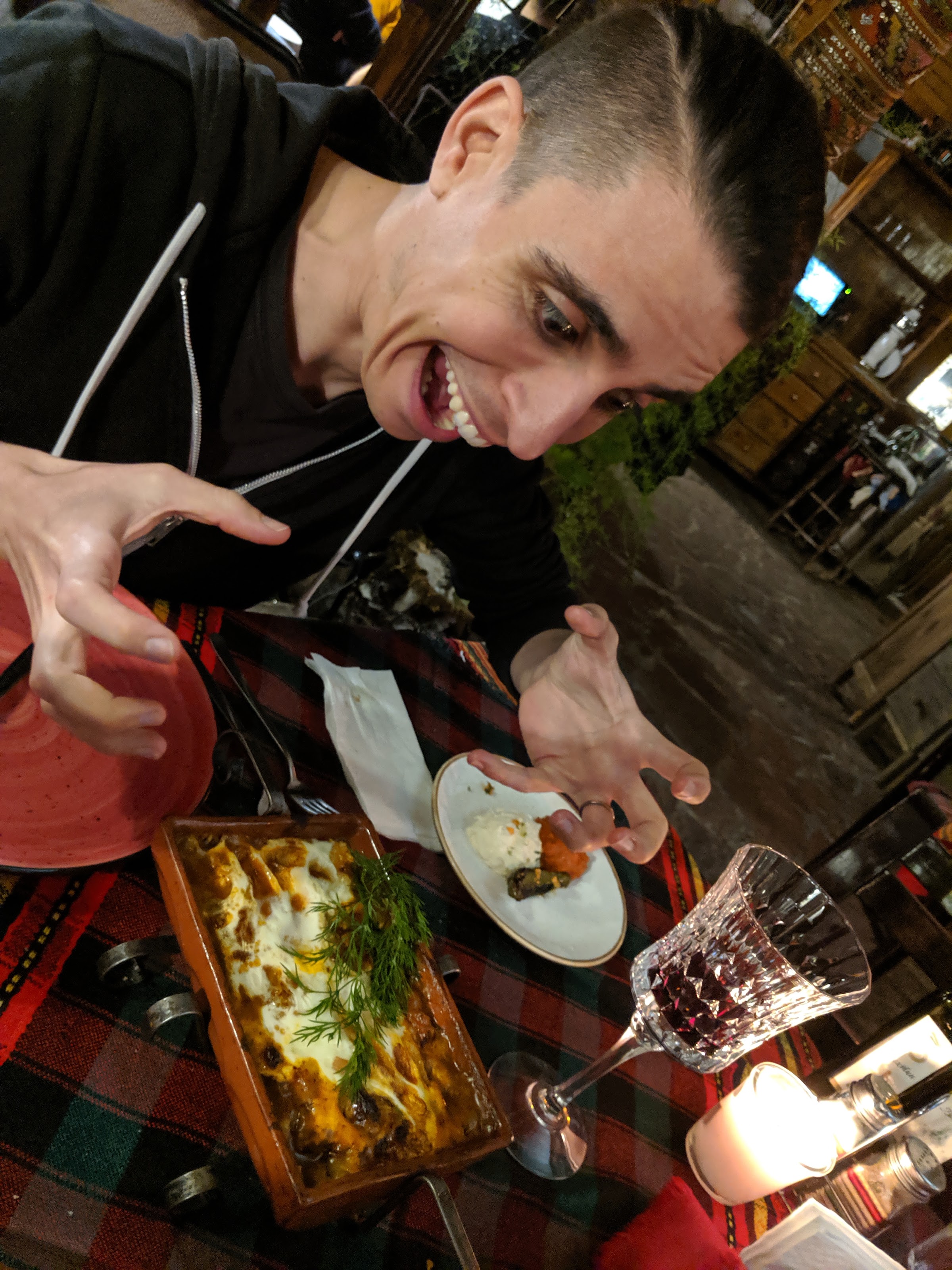 Isam is a happy camper.

Our main plan for the day is “Breakfast like a Bulgarian”: an Airbnb experience held by a lovely young local who takes us on a short tour to experience the delights of banitsa (a sort of filo dough with egg spinach and cheese), boza (a fermented drink that smells terrible but tastes pretty good) and ayryan (salty yoghurt drink). 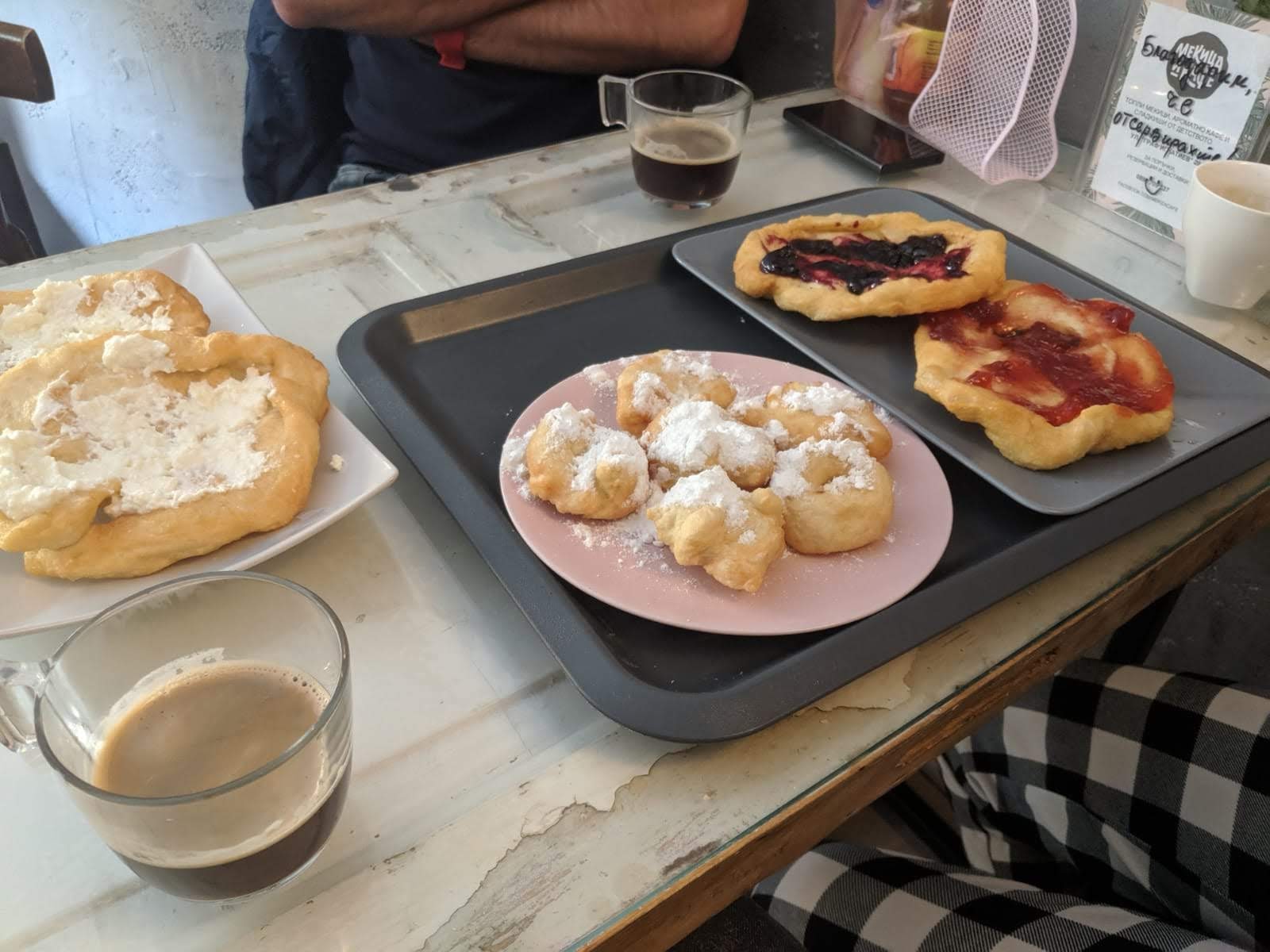 After two different establishments and a gargantuan amount of fried dough, we share farewells and set ourselves to explore the city. We talk a walk through the park, where we find martenitsa tied to the trees: a symbol of spring. We explore the local urban art. 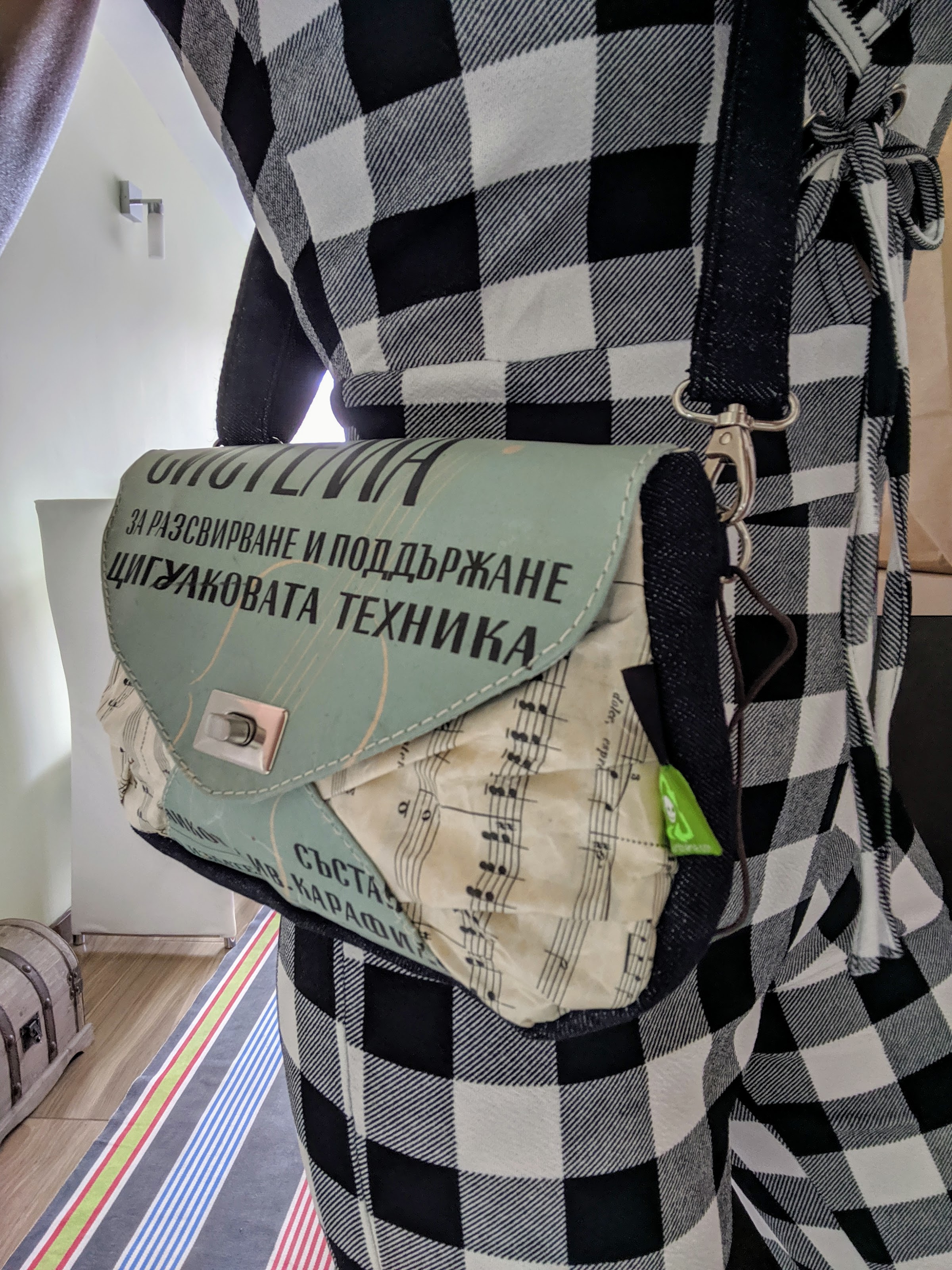 And Janel acquires a new, stylish purse (she’d been on the market for a new one for a few months now). Not feeling a sliver of hunger, we decide to skip lunch and take a longer walk through Borisova Gradina park (which feels more like a forest). We go pay our respects to the Founding Fathers of the Motherland in the Socialist Art Museum. 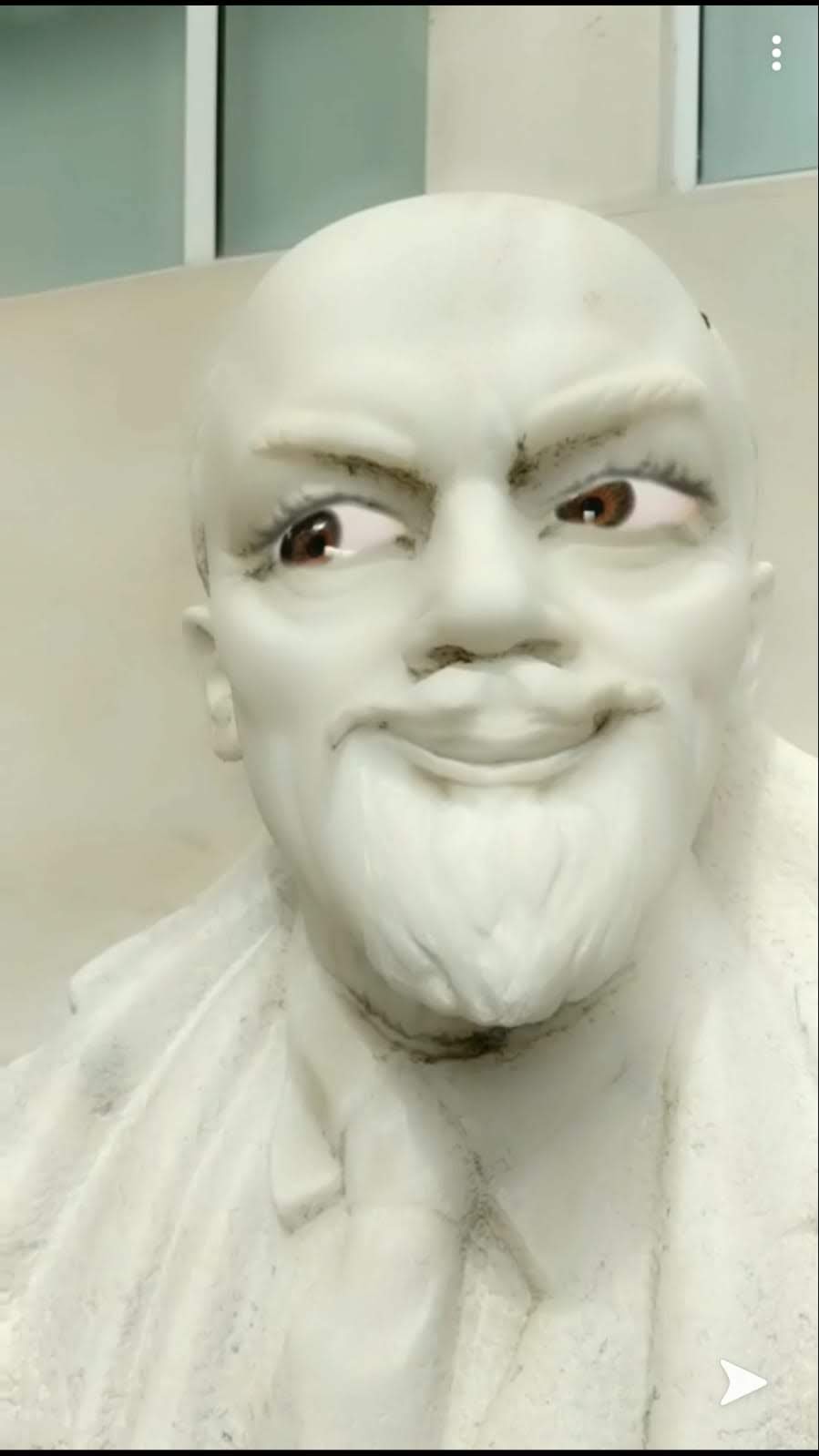 Despite Isam’s strong admiration for communist intellectuals, we can’t avoid applying Snapchat filters to Lenin’s face — which turns out to be the best part of the visit, in hindsight.

We taxi back to the center and learn about how to avoid taxi scams. We kill the rest of the afternoon sipping on delicious Serbian craft beer and chatting with the owner of Beera.

A little tipsy and a little hungry, we waddle to The Hadjidragana tavern, where we feast on mushroom soup in a breadbowl and a giant chicken sausage. We get acquainted with the local spirit, too: rakia, a distillation of plums with which we’ll end up becoming intimate.

We go back home and discover that very fast mimos are a thing. 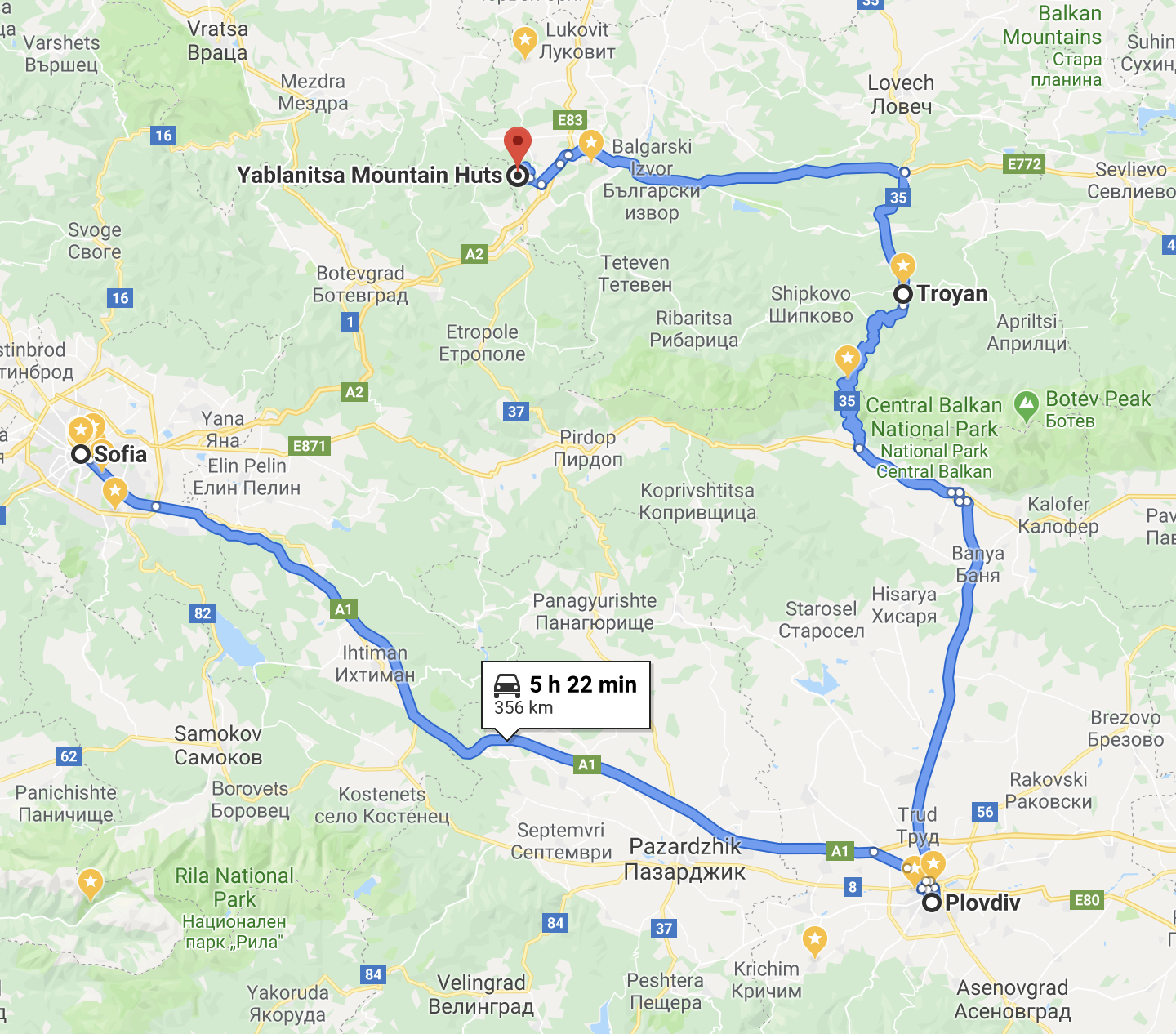 We wake up at the crack of 7:30 (shhh, don’t tell Isam that the alarm is set so early, he’ll be thankful later).

First up is a quick yoga session with Xuan Lan, which gives us the giggling fits as a few unsuspecting Tulum workers walk into her recording. The nerve! 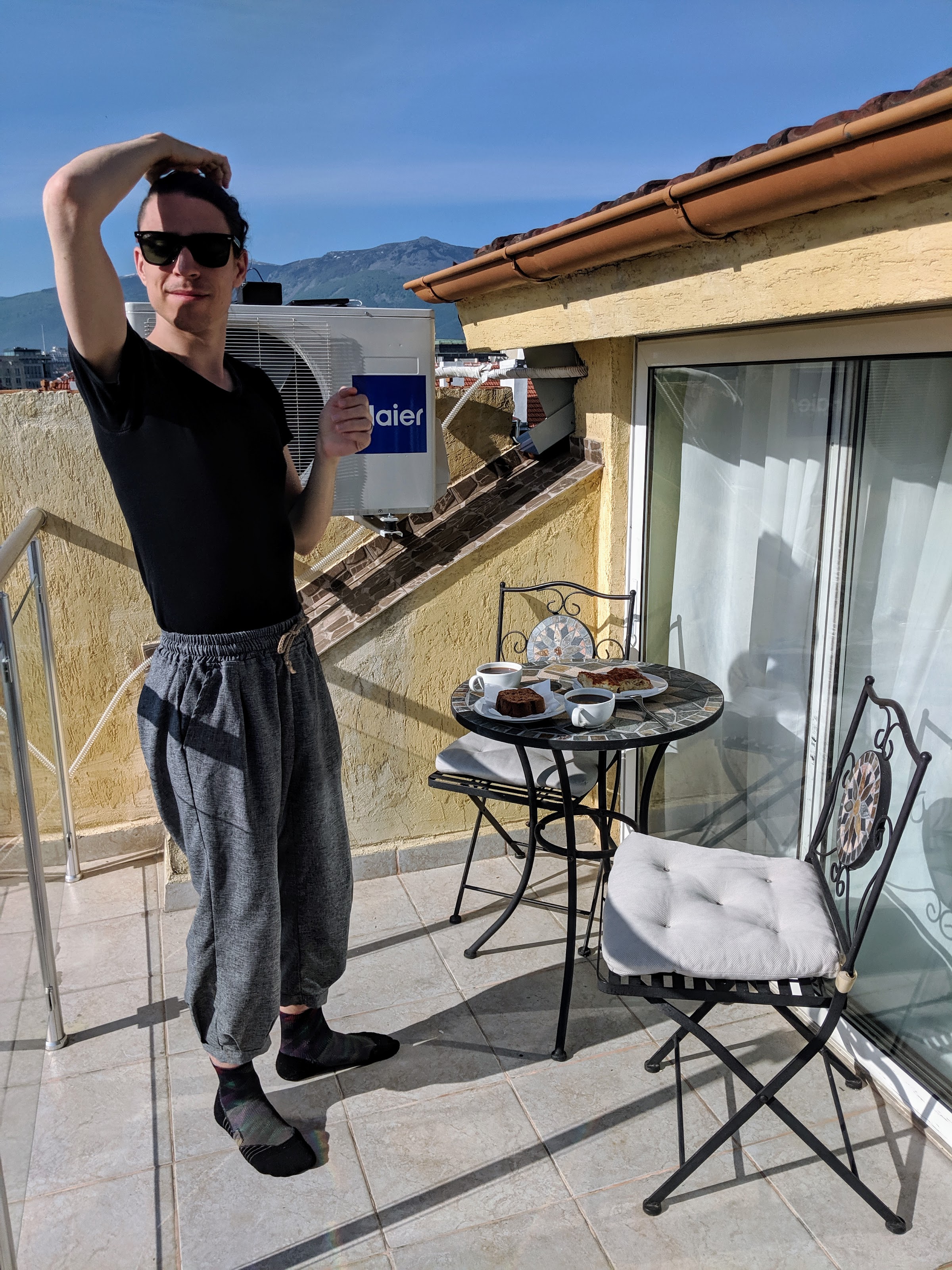 A shower, a bit of meditation, and then breakfast on the balcony. We like Sofia — a lot.

(we discovered some exciting new Catalan music as well)

A dodgy taxi gets us to the airport, where we retrieve our upgraded rental car and get going eastward.

We book it to Plovdiv, the second largest Bulgarian city — and the 2019 European City of Culture. We only get mildly lost along the way, plowing straight past a “do not enter” sign (“it’s just a suggestion, you know these old socialist roads”) and then enlisting the help of a friendly construction worker to get back on the highway. Plovdiv’s center is pedestrian, and today there’s a market — including an ENORMOUS grill smoking every kind of meat to high heaven. But thanks to our breakfast host from yesterday, we have better plans.

We make our way through the cobblestones to Pavaj, where we’re happy to be put on the waiting list. When the host asks for a phone number and hears the “+34,” he exclaims “Españoles?!” Turns out the guy is studying Spanish in a nearby university, and is eager for conversation partners — qué guay. 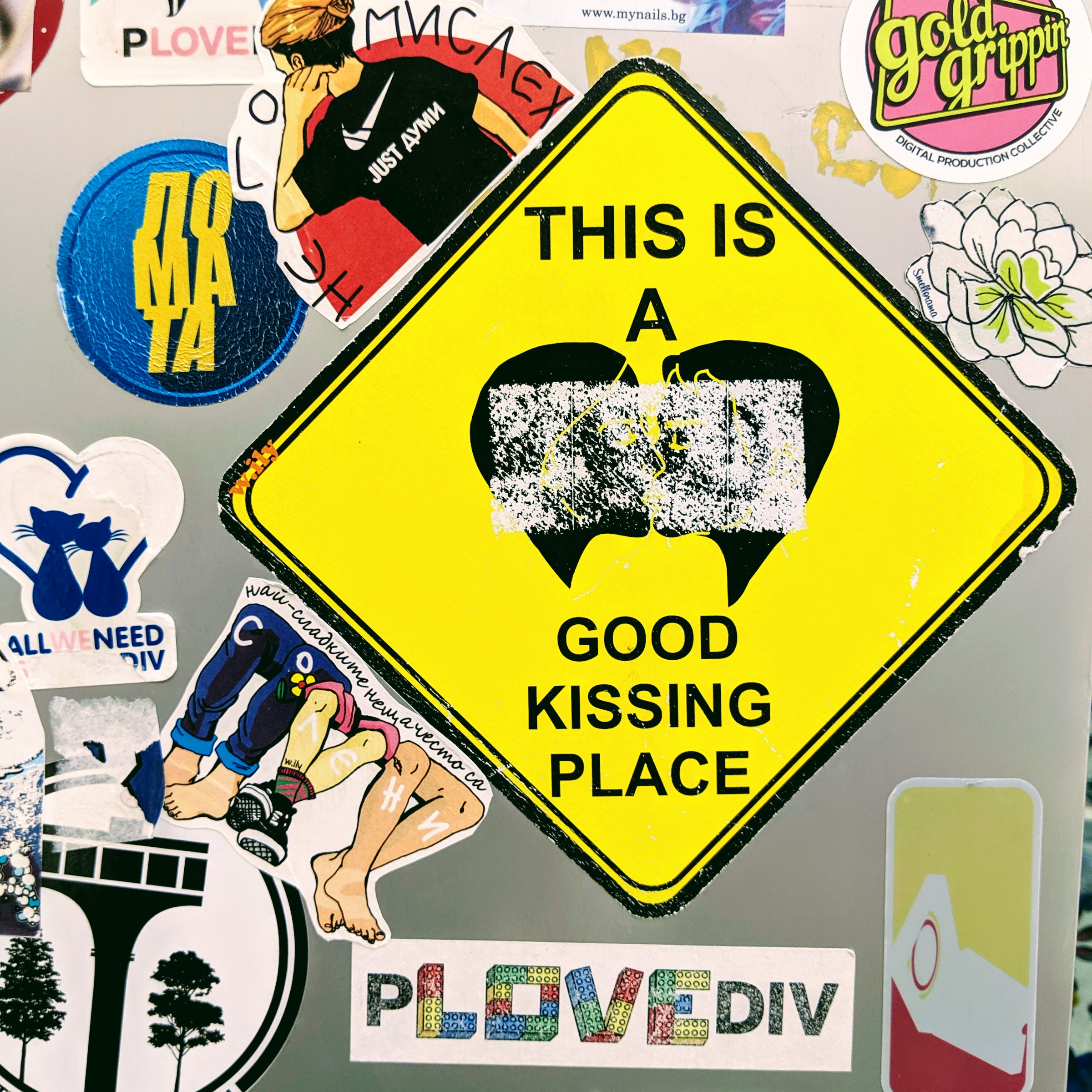 A quick jaunt around the winding roads later, we’re in love with Plovdiv and pick up a magnet proclaiming as such. It’s cuter and hipper than the capital. And our table is ready, so wins all around.

It’s a toasty day, and we’ve definitely overdone it with food two nights in a row, so we’re conservative with the ordering this time. Just a green salad with duck jerky and fried quail eggs, “deconstructed tarator” (yogurt with cucumber + pomegranate + baked walnuts), and housemade pâté with white cherry confiture. And a big beer to share. And brownie cheesecake with fresh berries. 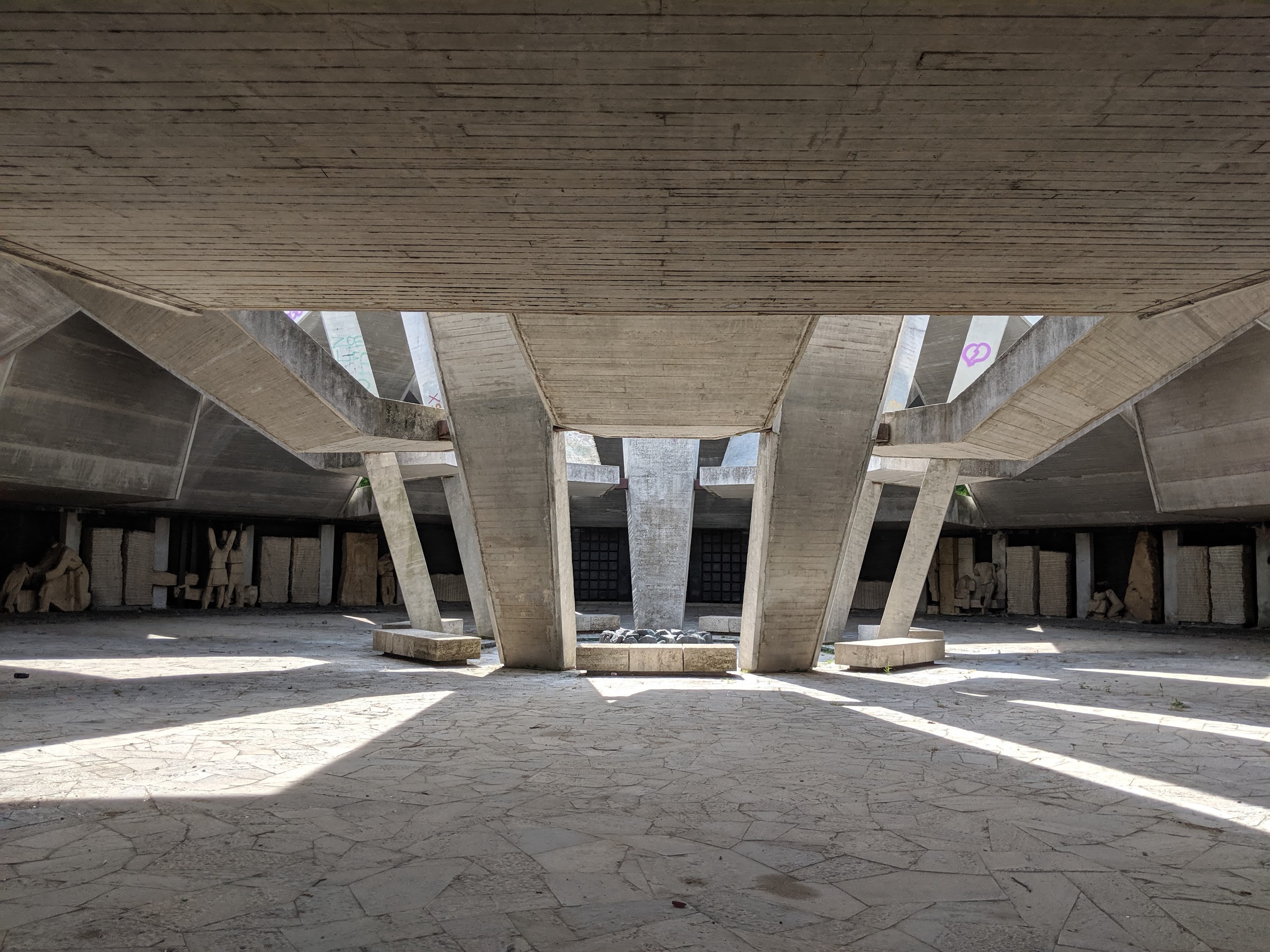 Before leaving Plovdiv, we visit our first Giant Soviet Monument of the trip: the Hillock of Fraternity. Its fallen into disrepair, full of graffiti tags and dust, and the area is closed to the public. It’s too bad — it’s a beautiful space, and it could be really interesting to see it reappropriated in some way (maybe for concerts? the acoustics have to be cool).

Instead of heading back west along the highway to Yablanitsa (where we’ll sleep tonight), we decide to take the scenic route and head north, towards Troyan. 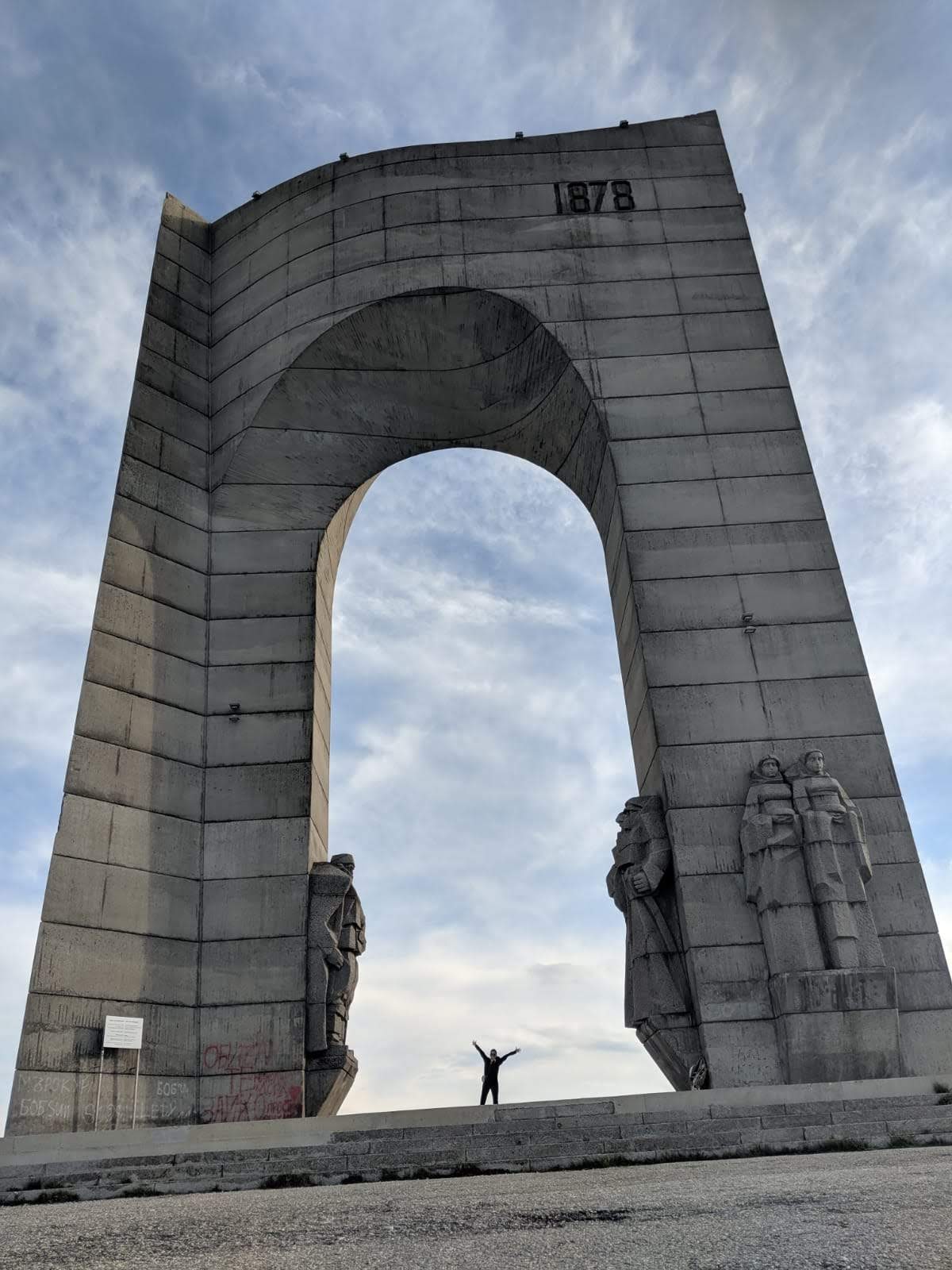 This route includes our second Giant Soviet Monument: the Arch of Freedom, perched atop the highest mountain in the Central Balkan National Park. It’s bogglingly huge.

At this point, it’s clear we’ll be arriving to our night’s destination quite late, but we don’t mind — it’s been an absolutely gorgeous day exploring the Bulgarian countryside. In many ways, the small towns are reminiscent of northern Spain in both architecture and spirit (if you don’t pay attention to the Cyrillic, or the occasional stark concrete façade).

We zip through Troyan and then head back west, accompanied by Playback Maracas and Muse. It’s just past 9 when we finally pull in to Yablanitsa Mountain Huts, where we are greeted by Pavel. Isam puts his age at 70 or so (Melly thinks maybe a bit younger). He’s a retired stonemason who speaks about 50 words of English all told — hey, that’s significantly more than our Bulgarian vocabulary! 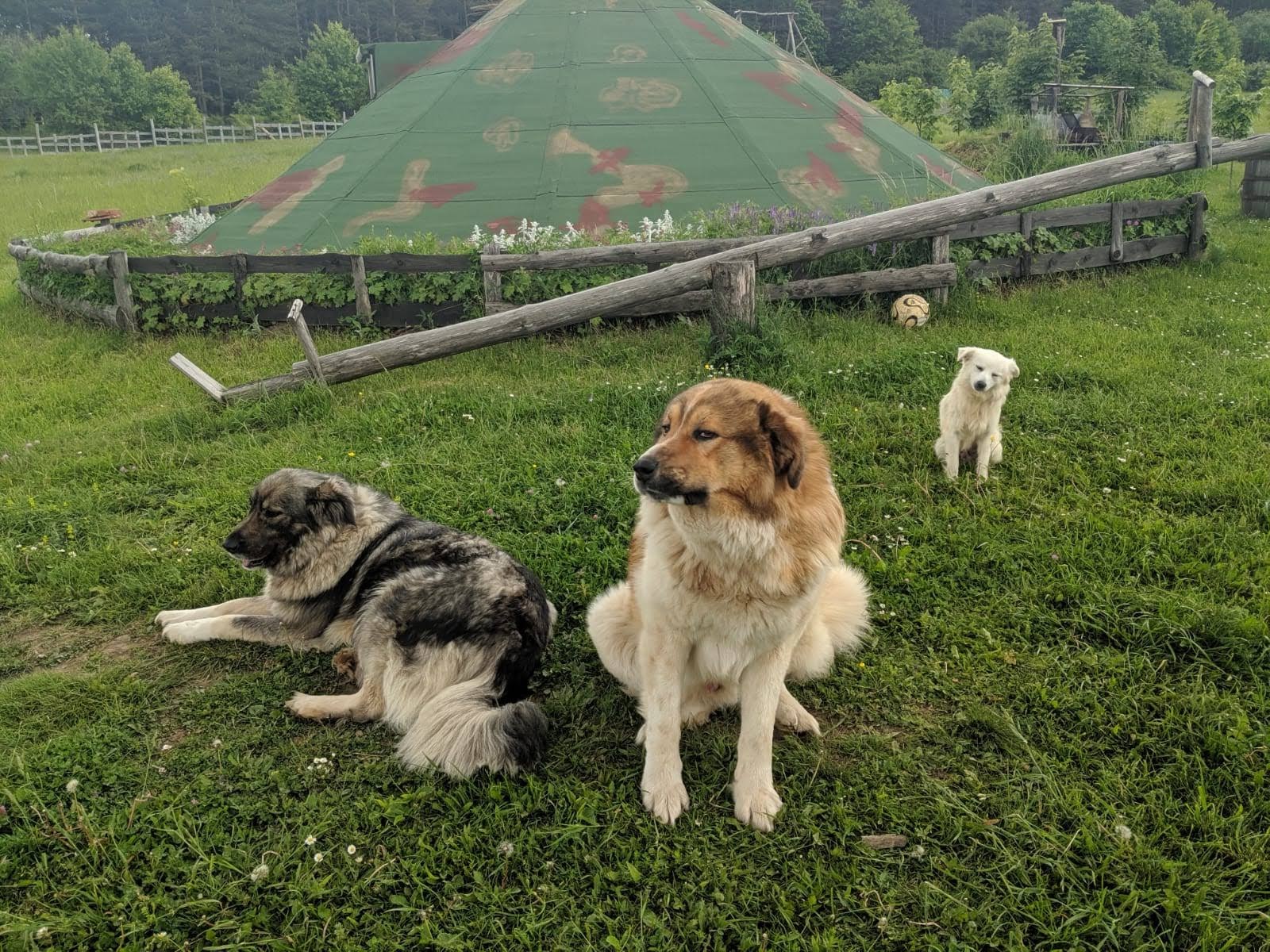 He gives us a brief tour of the grounds, including our very own hut, a swimming pool (that looks suspiciously cold), an outdoor bar, his own house, three extremely happy dogs, and — finally! — a central space with a homecooked dinner awaiting us.

Warm soup, the freshest salad you can imagine, vinegary mashed potatoes, and stuffed peppers. It’s all wildly delicious, and accompanied by homemade rakia — which Pavel insists we drink alongside the food (“salat — rakia. salat — rakia”). We’re used to a chupito of liquor after dinner, but have to admit that the rakia is intoxicatingly wonderful to sip on during the entire meal. Emphasis on “intoxicating.”

Soon his wife and son show up too, who speak great English and serve as translators + dinner company. We learn that guests from 59 countries have stayed at these huts so far! The family moved here from Sofia 6 years ago when Pavel retired, and they built everything themselves from scratch. Living the dream, man.

After much multi-lingual raucousness (“Sheep! You can eat them, you can wear them…!” “I haven’t been to the doctor in 20 years… rakia is my medicine.”), we decide that enough rakia is enough, and we retire to our candlelit mountain hut.

We wake up around 10 to discover the most amazing home made banitsa with delicious strawberry jam. Pavel is an extraordinary cook.

We are somewhat conflicted between jumping back in the car to visit the famous Rila Monastery (basically the one thing you’re “supposed” to see in western Bulgaria)… or to stick around and simply enjoy the majestic scenery and Pavel’s company. We decide on the latter. An excellent choice. We embark on two hikes, the first to a nearby TV tower (where we encounter a wild tortoise!). Then Pavel and the dogs invite us to hunt wild mushrooms! We nab one that pretty much violates MP’s dining rule (“never eat anything bigger than your head“). 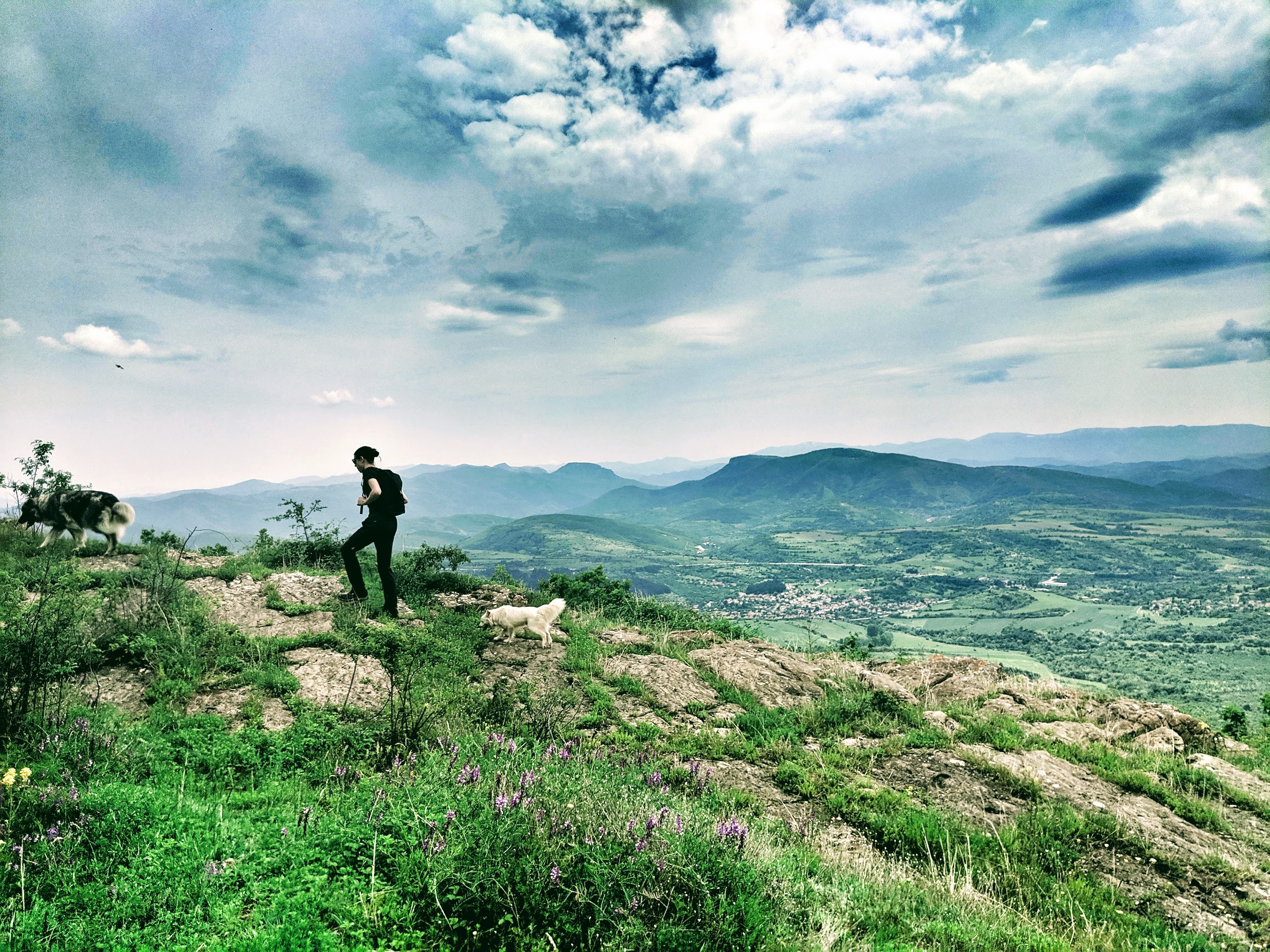 We enjoy Pavel’s curated vistas, too. 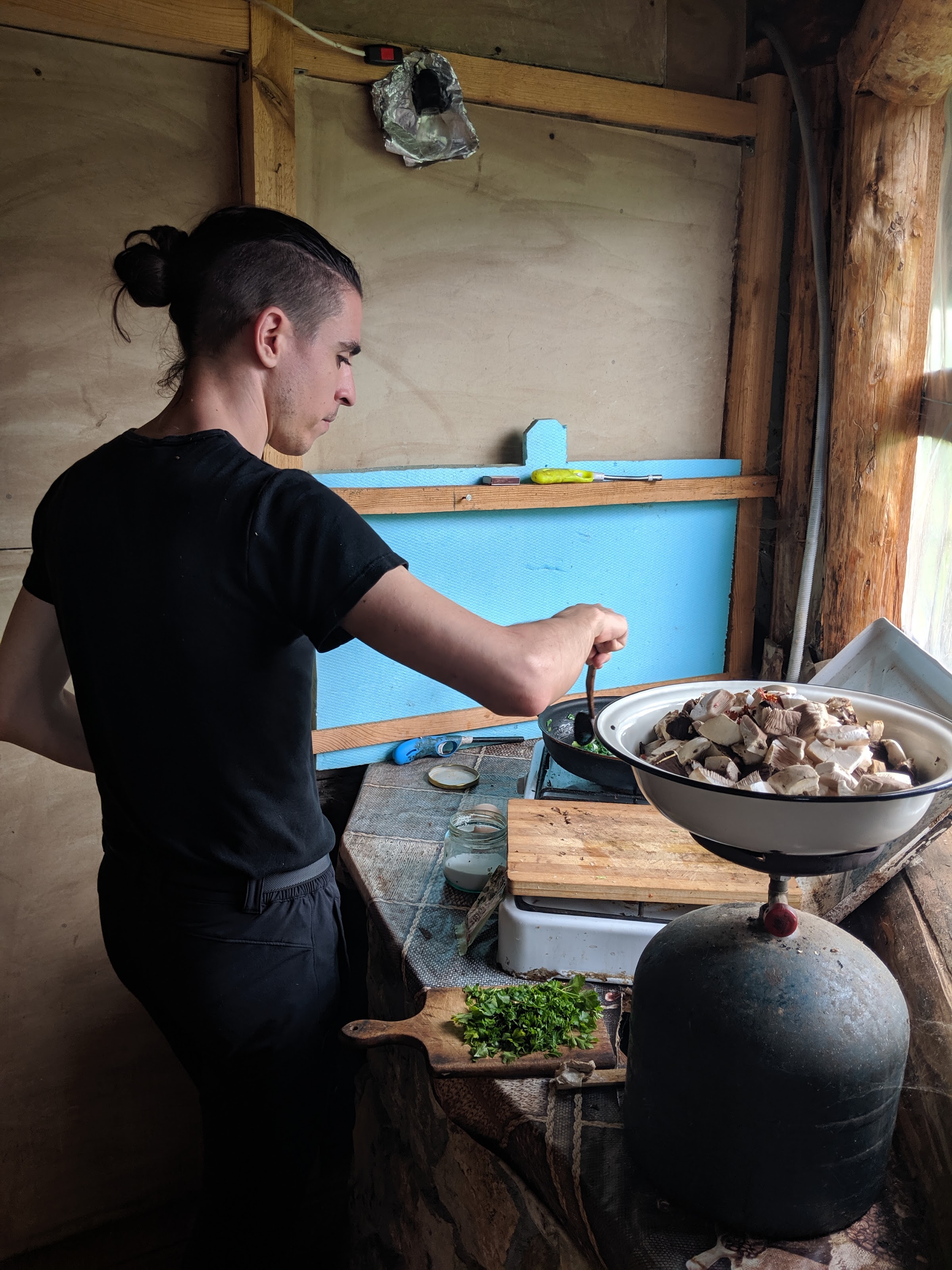 We use the mushrooms, freshly picked eggs (we help feeding the chickens too!), freshly picked parsley, freshly picked green onions, and (you guessed it) freshly picked some-kind-of-lemony-leaves-we-can’t-identify to prepare what will become the absolute winner of the whole weekend culinary experience: mind blowing scrambled mushrooms (and rakia, dude, of course). Also, Pavel’s kitchen is decorated with a huge portrait of Stalin (Isam strongly approves) along portraits of both Franco (Isam strongly disapproves) and Pinochet (Isam doesn’t understand anymore)… is he an old fashioned communist? a fascist? does he just fucking like dictators? Who knows, we decide we love him anyways. We finish the day with a paradisiacal nap in the twin hammocks.

A shower, a heartfelt farewell and a quick drive back to Sofia, where we manage to sneak in a couple delicious burgers from a hipster foodtruck (Janel strongly approves) right before heading to the airport.

Overall, Bulgaria is a beautiful, welcoming, and warmer-than-you-think place to visit. We are enamored with the food and very impressed with the vestiges of Soviet Communism. We’ve missed the Rila Monastery, the Black Sea, and the Buzludzha monument — among who knows how many secrets, so going back is a very real, happy possibility.